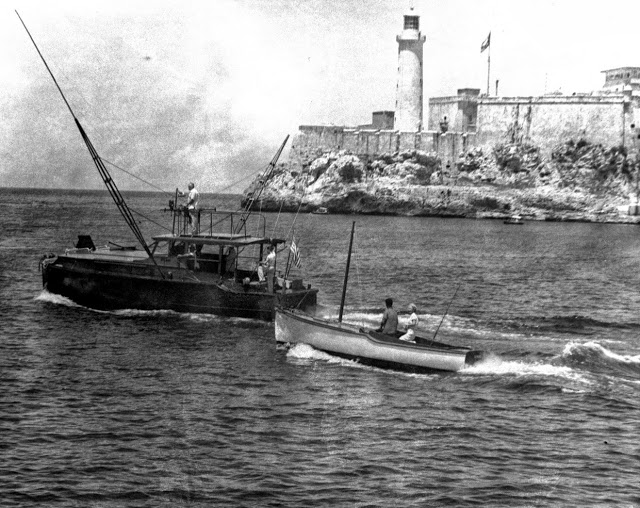 The American writer Ernest Hemingway from his early youth, felt a special fascination for the adventures; are known the days of his African safaris lived in the savannahs of Kenya, which inspired him to his high creative talent in his novel The snows of the Kilimanjaro; here in the midst of danger and of the unknown, gave flight to his extraordinary personality in the confrontation man-wild beast, which seemed to give a strange force to his spirit.

Also well-known are his marine forays, his attraction to the sea, his interest in navigation and sport fishing, where he could show himself the limits of human integrity, which nourished his ego and strengthened the unfolding of his creative imagination, resulting in works such as The Oldman and the Sea (Nobel Prize for Literature) or Islands in the Golf (Pulitzer Prize).

When World War II broke out, the writer soon became involved in the cause in favor of the allies, turning his country house La Vigía into the headquarters of the well-known Crook Factory, a kind of „intelligence and espionage service“, which would soon take the advice of the FBI And whose main purpose was the detection and unmasking of the 5th column in Cuba and its role of active collaboration with the Rome-Berlin-Tokyo Axis forces. But if that was not enough, Hemingway carried out a daring project, turning his boat, the yacht „El Pilar“ into a sort of submarine hunter. It was a time when the Cuban coast had become a frequent part of the incursion of Nazi submarines, and its intricate canyons, clustered with canals and tropical vegetation, could become the perfect place for u-boats to remain hidden from the waiting for their usual prey, the merchant ships, to make their surprise and macabre incursions. Hemingway knew perfectly these places, which he had traveled from ancient times, when, with Mayito Menocal and using the yacht „Delicias“ (owned of his father, the Cuban President Mario García Menocal), had penetrated those waters several times.

With the royalties of the novel „For Whom the Bell Tolls,“ Hemingway had acquired his own yacht, which he named „Pilar“, a boat built of mahogany and oak, with 11.86 meters in length and 3.65 width and equipped with a 100hp Chrysler engine, which was built by the Wheeler Yacht & Company shipyard in Brookliyn, New York.

For this new use as a war craft, the writer painted the boat in black color, armed with a Thonson machine gun and several dozen hand grenades and homemade bombs, and also recruited a crew that was composed by Gregorio Fuentes (skipper), a telegrapher from the American embassy and a group of Cuban and Basque pelotaris (pelota player), including Felix Areito, Juan Durañona, Pachi Ibarlucea, Paco Garay and Hemingway himself.

Ambassador Sprullien Braden funded the project, advising him through the US Naval Intelligence Service, paying him a monthly salary of $ 1,000 and supplying him with 122 gallons of naphtha for the vessel. With all this, Hemingway carried out the patrolling of a long maritime strip of the Cuban coast, pretending to be an oceanographic expedition; However, the encounter with a German submarine never took place, chance did not want this to happen, despite the obsession of the American because that had taken place; However, it is very likely that at some point, the presence of this vessel would serve to drive away some intruder, but this is also pure speculation. In those years Hemingway, in one of the letters written to his friend and comrade-in-arms, the Soviet filmmaker Roman Karmén, relates his adventures in the hunting of Nazi submarines: „here in Cuba, I am also fighting the fascists“, reports in his missive.

Finally the own F.B.I. ended the „Hemingway adventure“, canceling the project and today, those events have only remained as a picturesque memory of some difficult and dramatic times. 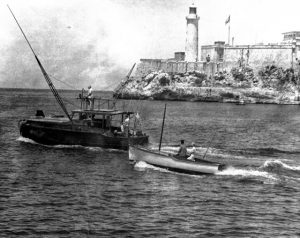 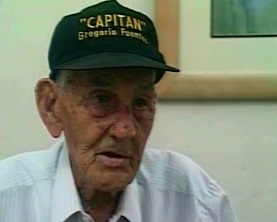 Gregorio Fuentes, Skipper of the “Pilar” 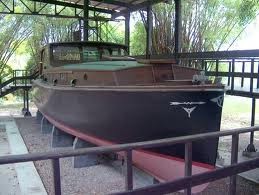 The “Pilar” became a Museum

The historian Maximino Gómez with Noberto Fuentes (writer), one of the most important biographer of Hemingway, author of the book „Hemingway in Cuba“

„For me, Hemingway has always had a special meaning; I lived in Cojimar for many years, the fishing village that served to Hemingway as inspiration to write his novel The old man and the Sea. Gregorio, the skipper of the Pilar, lived very near to my house and I remember his stories about the trips with Hemingway. I have always admired Hemingway for the strength of his work and his extraordinary talent.“