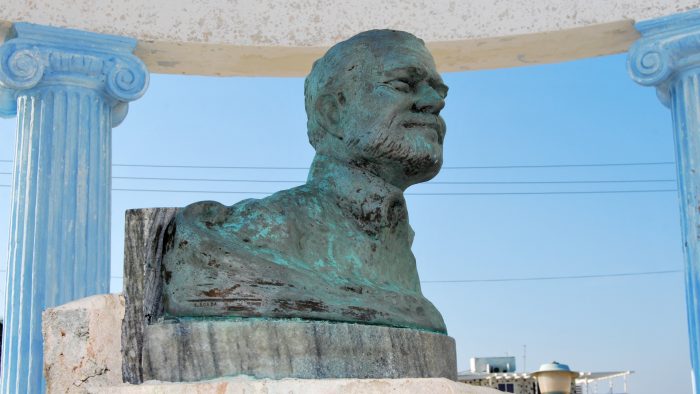 Cojímar, the small fishing village east of Havana, served as inspiration for the American writer Ernest Hemingway, who soon became in one of his favorite places on the island of Cuba. There lived the skipper of his yacht, the Cuban of Canario origin Gregorio Fuentes, who accompanied the writer on more than one occasion in his marine adventures; also, there rested his yacht the Pilar after the exhausting voyages. In this place Hemingway found a river of inspiration that led him to create one of his masterpieces, „The Old man and the Sea”. Cojimar welcomed him, his inhabitants venerated him, and when one day he left forever, the men and women of that town wept disconsolately. In 1962, the humble fishermen wanted to pay tribute by placing a small bust of writer and for this, many fishermen offered the propellers of their boats to merge and use them in the sculpture that would perpetuate their memory among the cojimeros. Every year, on the anniversary of his birth, Gregorio Fuentes went to the monument and poured a bottle of rum, in a kind of toast among friends.

Today, the bronze look of the writer seems to be lost in the immensity of the sea that he love so much.